Those of you who know me reasonably well, know that I enjoy tinkering with old software. As a developer I've always been fascinated with the evolution of software throughout the years. As a result I tend to collect old pieces of software. However 95% of this collection is electronic as I have tended to shy away from physical media. However not even this strong preference has been able to keep me wondering throughout the years, "What is happening to all of that old media?"

First off, let's define what constitutes "old" as that is a relative term which encompasses different time periods for different people. For the purposes of this discussion the term "old" primarily refers to 5.25 inch floppy disks as that is really the first form of media that I became accustomed to while growing up. For others it might refer to the old 8 inch floppy disks. And for others it might refer to 3.5 inch floppy disks and if it does, chances are you aren't going to appreciate any of what follows ;) In any event to narrow down the context of this discussion further, I'm primarily interested in 5.25 inch floppy disks that contain data and/or programs for IBM DOS compatible hardware as that was my preferred platform of the era in question.

Needless to say if you do the research you will quickly realize that extracting the data off a 5.25 inch floppy disk is nearly impossible with modern day hardware. Modern PCs no longer contain the legacy ports and/or controllers required to connect traditional floppy disks. In addition modern operating systems do not tend to include any support for such antiquated devices. 3.5 inch disks are a different story as one can readily purchase cheap USB 3.5 inch drives and modern day operating systems still at least include partial support for this form of media. 5.25 inch floppy drives never had any USB compatible variants created for them however which poses the question that has rattled around in my mind for years: How does a modern computer user with modern equipment go about extracting data off of these 5.25 inch disks?

Well today I'm going to answer that question for you. I recently purchased a Kryoflux interface board from it's manufacturer which is located in the United Kingdom. This is a device that has been created to solve the very problem that I wanted to solve. The only downside is that device requires that you supply a compatible drive for the media in question and the device will provide a USB compatible interface and the appropriate software to access the data from that drive on any modern PC running either Windows, Linux or Mac OS X. Keeping that in mind, I headed on over to Recycled Goods and tried to pick a relatively decent looking IBM PC compatible 1.2 megabyte 5.25 inch drive out. Though let's be honest - you are kind of shooting blind here no matter what you do. The newest 5.25 inch drives are going to be at least 20 years old. So getting a working one on the first try would constitute something of a small miracle.

Never fear though I'll spare you the nonsensical build up and reveal the outcome immediately: The drive worked perfectly. It was well worth the $30 that I spent. In addition the Kryflux unit and it's associated software worked exceptionally well, though to be honest the GUI front end for the software is next to useless which necessitated direct use of the command line utility. Though to be fair that utility is still fairly simple to use, even within Linux. For the curious here is a picture I took of the setup that I now have:

Above you can see the setup of the Kryoflux hardware. In the middle we have our 5.25 inch 1.2 megabyte floppy drive. That drive is then connected to an AC Adapter (provided with the Kryoflux) that is then connected to a wall outlet. In addition the drive is also connected to a traditional floppy cable which then plugs in the Kryoflux board located behind the drive. That Kryoflux board then connects via a USB cable to my laptop with Arch Linux on the right. The floppy disk hanging out of the drive is the first of two 1.2 megabyte disks that I received when I ordered a used copy of wonderful SSI Gold Box era RPG, "Pools of Darkness" from a private merchant on Amazon. This game dates back to 1991 and was probably one of the last few games to be released on 5.25 inch diskettes.

Yes I have begun to acquire software on 5.25 inch floppy disks in an effort to be able to actually use this setup. Believe it or not I acquired all of this hardware before I had a single piece of compatible media in my possession. I'll spare you the cliche statement about a chicken and an egg. In any event I have successfully tested this hardware with multiple pieces of DOS era software, stored on both 1.2 megabyte 5.25 inch disks and 360 kilobyte 5.25 inch disks. Both forays proved to be immensely successful as I was able to successfully create error free disk images from all of the disks I now have in my possession. Though in the case of the specific game that is pictured the disks have obviously begun to degrade and I had tweak the number of retries allowed to read each track in order to create error free images. 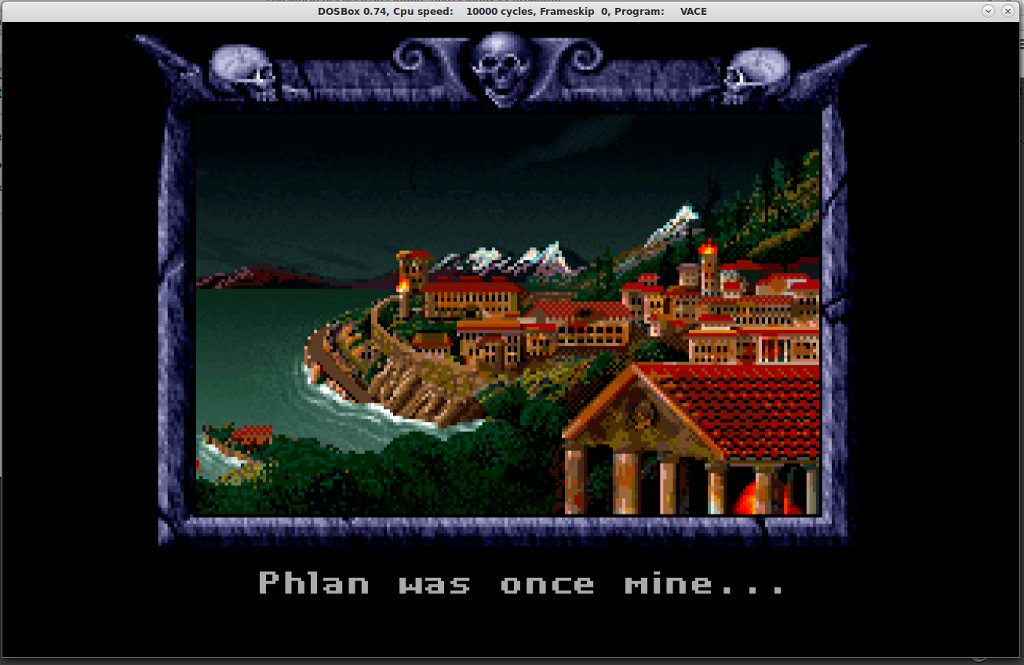 Keep in mind that when I say the process was successful, I mean it. I've gone so far as to install these games and actually play them using the premiere DOS emulator, DOSBox . What you see above is a screenshot of the copy of "Pools of Darkness" that installed from the two ripped disk images actually running.

At the end of the day one must ask, "How useful is all of this?" The honest answer of course is, "Not very." Still I can't help but to be reassured that should the true need to read a 5.25 inch disk ever arise, that I now have the experience and the tools at my disposal to accomplish the task in relative short order. In addition since the Kryoflux interface board is compatible with a wide range of floppy drives from various systems, the possibility of acquiring drives for other systems such as Apple IIs, Atari STs, Amigas and Commodore 64s so that I can attempt to preserve data on those diskettes is a very real one.