Jay and Annette Wedding 2004 - The Proof is in the Pictures

I've finally decided to settle down a bit and as a result I've gotten married. Who was the lucky (unlucky?) girl you ask? Well it was none other than my long time girlfriend, the love of my life, and truly my soulmate: Annette Louise Prescott. I know that I haven't spoken about Annette very much on the site so here is a little bit of the backstory for those of you who don't already know:

I met Annette in March of 2003 while working on an extended contract at General Electric. Though her time with GE was short - I managed to work the nerve up to ask her out on her third day working there. What can I say? She's a hot chick and somehow I managed to pull enough smooth moves out of my rear-end to get her to go on a couple of dates with me. Initally she was a bit shocked that I was nine years younger than her as she is 33 and I am 24 currently. It didn't turn out to be an issue because we both seem to be able to coexist on the same maturity level. As they say everything from that point on was history...

Annette and I decided to move in together in March of 2004 as we had been both hit rather hard by the tanking economy. We figured we could save quite a bit of money by moving in together and it really seemed to be the next natural step as we spent the majority of our time together anyway.

Fast Forward to April and things are going great. Well our job situations haven't improved too much - things are looking up a bit. We finally decided to go ahead and get hitched when it became clear that we were not going to be able to elope and get married in some exotic place. We both donned our ball and chains on April 11th, 2004 somewhere around 2:15 PM at my Grandmothers home here in Greenville. The ceremony was rather small and only family (or would be future family members such as the boyfriend/girlfriend of my sister/brother) were invited. Below are some of the finer photographs that we have to remember the occasion by. These have been scaled down of course as the high quality originals could not be feasibly displayed on a web page as they were nearly a megabyte a piece. If anybody locally here in Greenville is interested in obtaining higher resolutions shots - let me know and I'll burn a CD for you.

Pictures Pictures everywhere and not a one that isn't amusing 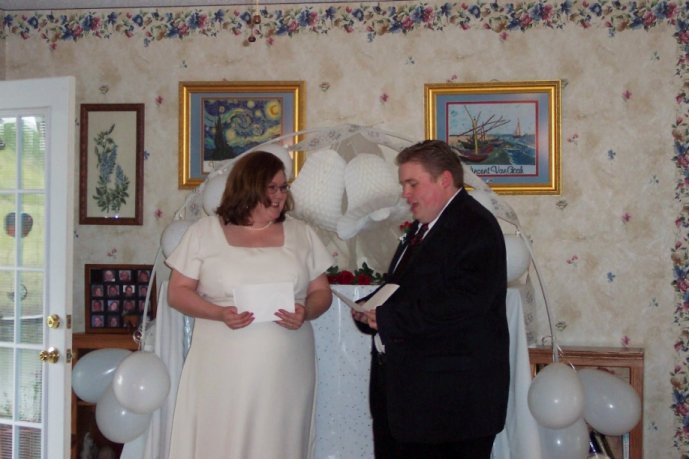 Annette and I wrote our own vows (click here to download a copy). Here is a shot of us reading them to one another in my Grandmother's living room. 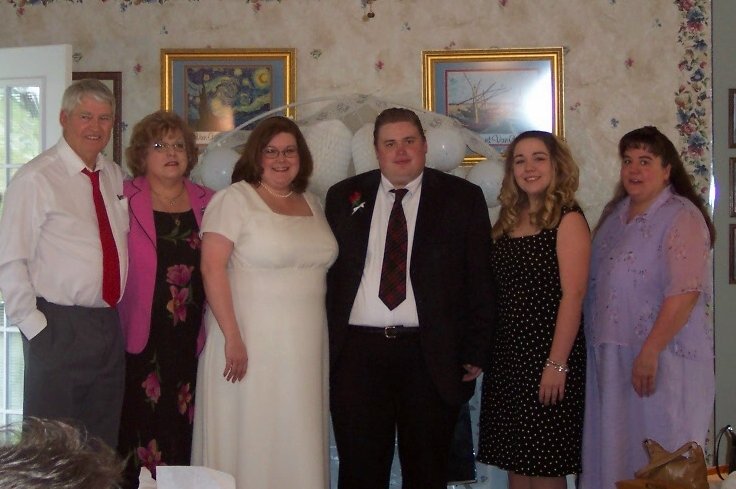 This is a picture of the members of Annette's family that attended the ceremony. From left to right: Her stepfather Everett, her mother Maragret, Annette, Jay, our niece Courtney and our sister Paula. 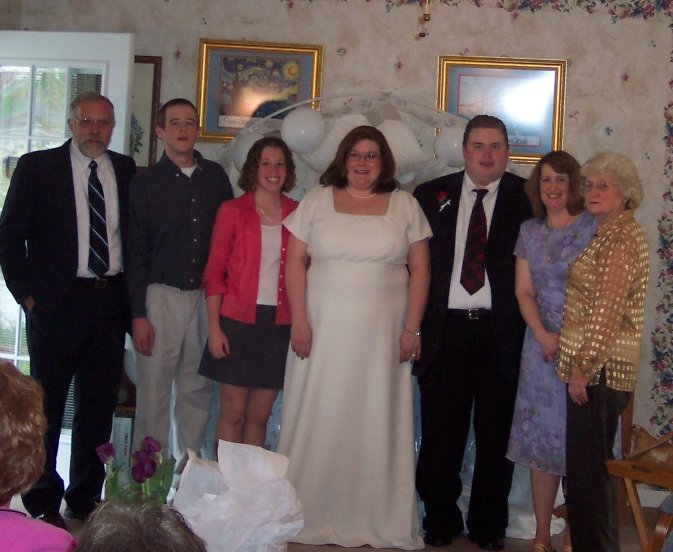 This is a picture of the members of my family that attended the ceremony. From left to right: My father Pat, our brother Andy, our sister Jennifer, Annette, Jay, my mother Kathy and my Grandmother Joan. 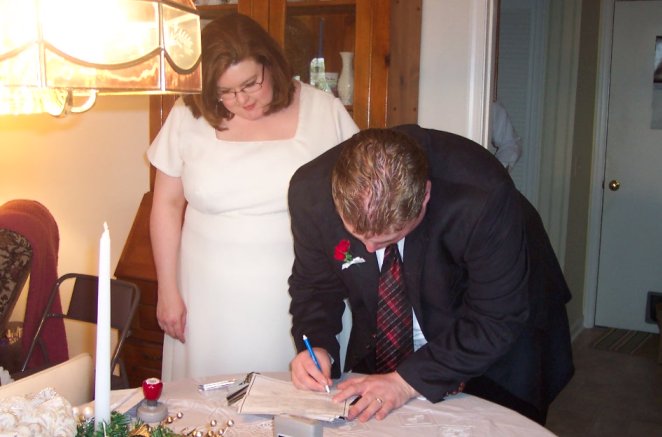 Did anybody else hear that sound? Oh that must've been the ball and chain being attached as I signed the final copy of the marriage license above. Just Kidding. 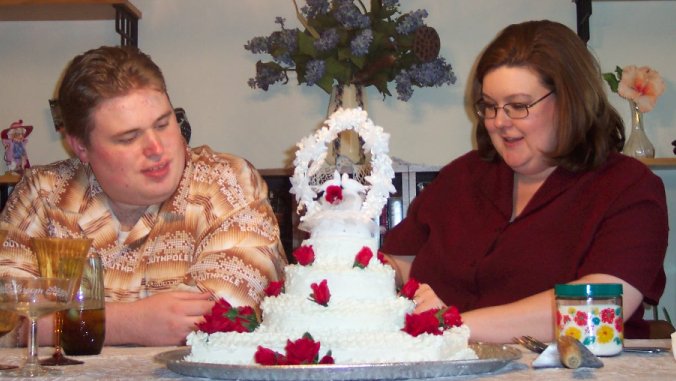 Wow it's time for the some cake! My mom made this delightful little cake that we proceeded to enjoy very much. Unforunately I don't remember quite what it tasted like.... 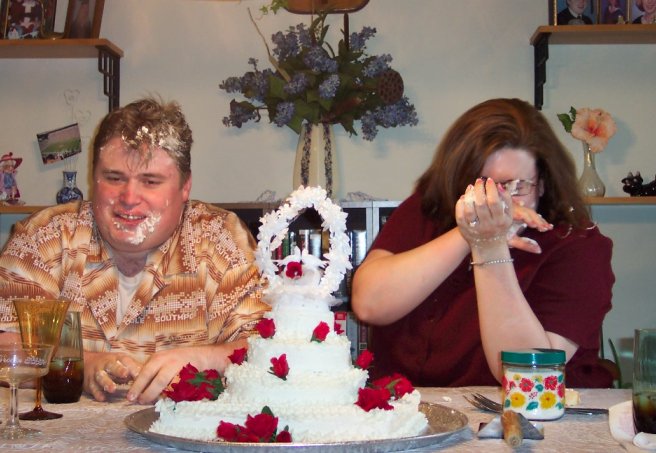 Opps. I'm not exactly sure who got the worse end of that deal but let me tell you - it is a real bitch to wash cake out of your hair. It REALLY sucks. Don't try this one at home kids. 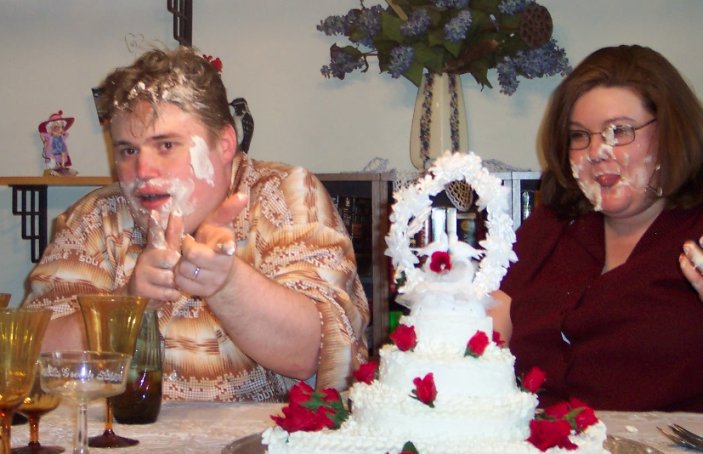 There were some requests for more "Cake Fight" pictures. I aim to please. Apparently I was high during this picture as I attempted to craft the frosting into some sort of mustache and beard.

Thats it for now. I have quite a few more pictures but I've only got the time to post a few of them for the time being. Perhaps I will take the time to post some more of them later - perhaps not. You never know quite what is going to appear upon the pages of this site from day to day though some would say that laziness seems to be the only constant when it comes to updates at jaylittle.com. Note: You can download a copy of the wedding vows by clicking here .