Why The World Needs To De-Platform Donald Trump

This post represents a softening of an opinion I expressed on this very website less than two years ago. If you haven't read that post, you should go back and read it before reading this one. Back in the wistful days of my youth (before I turned 40 mind you) I emphatically argued that social media platforms should cease and desist their de-platforming of individuals that they found objectionable. I specifically made this case using the de-platforming of Alex Jones as the central example. However in light of the current events surrounding this post and after taking a very long and hard look at the events of the last three and a half years, the time has come for me to change my opinion.

The core flaw in my reasoning was simple: I believed at the time that free speech was a liberty worth defending regardless of context and ultimately of consequence. While the US Constitution only guarantees free speech in terms of it being free from government interference, I was more than happy to extend that protection to its absolute logical (though some might fairly say illogical) conclusion. In addition the focus of that post was more narrowly focused on Silicon Valley and how its actions promised to influence public discourse at the time.

I have over the last few months done a lot of thinking as a result of the Coronavirus and as a result of the current protests and riots taking place in the streets of every major city in America. Throughout all of this, the president of the United States, Donald Trump, has been speaking and tweeting conspiracy theories, lies and outright lunacy. The content he produces, which we as a nation are consuming regardless of whether or not we support him, is beginning to result in some very serious negative consequences for this country and perhaps even the world as a whole.

I can already hear the naysayers who personally know me now, "But we all know that you hate everything about Trump so this argument is incredibly self serving and politically expedient." Let me be the first to admit to you, that I have loathed Donald Trump since the very moment he set foot on that goddamn escalator at Trump Tower. I will also be the first to admit to you that seeing how many of my friends and family members are still willing to pledge their unconditional support for this man and his so-called "platform" regardless of how obviously incompetent he is, absurd his words are or insane his general demeanor continues to be, may have irreparably reduced my opinion of them as people. Only time will tell on that front.

But putting all that aside, we can't keep ignoring the consequences of allowing this to continue. While Trump engages in a tweet storm every few hours, cities in this country are burning. While Trump gets up on a podium and SERIOUSLY suggests that we look into how we can inject disinfectant and shine UV light rays inside the body as a method of combating the Coronavirus, people are fucking dying. This has got to stop. All of these losses are preventable.

A competent president would step aside and let the experts lead the charge while making sure they have the resources they need to tackle problem, managing the expectations of the public and dropping an inspirational word from time to time. Instead police departments are actively waging war against the people they are sworn to protect. Instead we have a Department of Justice which is arguably led by the most corrupt Attorney General this country has ever seen. Instead we have a Coronavirus response that makes Typhoid Mary look like a wannabe. Instead we are actually currently debating whether or not we should allow mail-in voting despite the fact that its been around for decades and there isn't a single ounce of evidence indicating anything more than the tiniest measurable sliver of fraud or the fact that virtually every high profile figure who argues against it, Trump included has been mailing in their ballots for years now.

While the rest of the world debates whether or not Twitter doing the absolute bare minimum by adding small fact checks to the bottom of a handful of Trump tweets is actually enough, I say we need to go far beyond that. Whether or not Twitter continues to do this is utterly irrelevant because on the internet the facts are pretty easy to obtain. The empty husks who currently take what Trump says and tweets for granted, otherwise known as "his base", are not going to give a shit. They won't click those links. Just like they aren't going to Snopes or a search engine and verifying Trump's statements against those of a reputable source.

What I'm proposing is far more extreme than Twitter simply closing Donald Trump's account. No I say the time has come to de-platform Donald Trump in every single way imaginable. Twitter should close his account. Facebook and all other social media networks should do the same. The media should no longer film or broadcast his press conferences, rallies, campaign stops, golf outings, "flex" parties at Mar-a-Lago, share his tweets or refer to him in any way, shape or form. Comedians should stop making him a punchline. Ex-Administration officials should stop writing gobsmackingly insane tell all books that his base either can't or refuses to read.

The other key takeaway here is that we can't do what the Germans did when presented with the horrifying reality of the Third Reich and attempt to pretend it never happened. When Trump is no longer president, regardless of how that comes to pass, then and only then should we begin to take in the level of collective damage he and his enablers have done to our country, our discourse and our humanity. At that time we need to seriously reflect on what happened and what weaknesses exist in our society that allowed things to get to this point. We also need to have an honest and open discussion about the failure of our collective morality and how a dependence on soothsayers of religious mythology to act as the countries moral compass have directly led to this disaster.

In the meantime, the time has come to de-platform Donald Trump in the most extreme way possible. Those who know me, know that I have not come to this conclusion lightly. It actually hurts to even post this on some level and the Libertarian side of me is waging an insane battle to trick my fingers into pressing CTRL-A and then hitting DEL. But the Liberal side of me is able to override that because as a president, as a politician and as a human being, Donald Trump comes up so ridiculously short by any objective measure available, that the time has come to deny him his ability to wage his war upon our collective consciousness.

I don't care for the death penalty either. I think that it should only be used in the most extreme cases. I'm talking Charles Manson levels of fucked up evil here. Most uses of the death penalty are insanely superfluous and serve only to document the degradation of our justice system into a tool of the status quo and an instrument of revenge rather than the mechanism of blind impartial justice it is supposed to function as. However much like the death penalty, there are times when particular people just absolutely need to be removed as they represent a cancer the likes of which cannot be combat in any other way. In terms of his caustic effect on society, the public conversation and the country at large, Donald Trump now qualifies for what I consider to be this novel and ultimate form of punishment in the information age. To put it bluntly: He has lost his right to exist in the hearts and minds of those of us who still value and doggedly cling to the concept of our collective humanity.

Now I realize that, in the unlikely event society decided to go down this road, not everybody would go along with it. I also realize that there is no way to force anybody to do that and I'm glad we live in a world where that is the case. However if every single reputable and mainstream platform simply decided to excommunicate Trump and by extension his cancerous political apparatus from their platform, that would effectively negate his ability to continue to wage war on the rest of us and it would also deny him what every narcissist desires more than anything else: Attention. Beyond that most of his hardcore supporters on Facebook would depart en masse, thereby rendering the Trump campaign and their partners in Russia incapable of micro-targeting them with fake news. This alone would likely prevent him from being reelected. Likewise, I'm sure a lot of his Twitter followers would follow him to some alternative platform like Gab, but not all of them.

In closing, I'd like to share an anti-Trump image I put together a few months back when I first began flirting with the idea of posting a serious anti-Trump diatribe here. While it doesn't really apply specifically to this post and the argument I'm making, I'm pretty sure that most of my readers will nonetheless appreciate it. And frankly, in keeping with my own suggestion, this will likely be the last time I refer to Trump on this website as long as he remains in office so this will be my last possible opportunity to share it. Note: The original unmodified image, created by Sam Carter, can be found here. 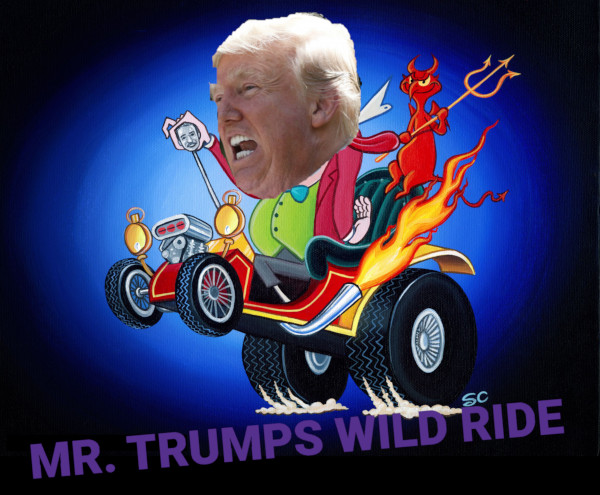 I wish everybody out there who, like me, suffer when they realize each and every morning that this buffoon is still our president, the best of luck. One way or another we should all try to remember that in time, this too will pass.