A sign of true Geekdom: I beat my 1st game EVAR!

It may have taken 18 years of screwing around - but just a few days ago I finally managed to beat the very first computer game I ever played. The game is called "Below the Root" and I played it many times as a child on our old Apple 2E personal computer (though it was available for the C64 and PC as well). Over the years I've tried to beat it (as I never managed to get around to doing this as a child) using various emulators but I never seemed to be able to get my shit in gear enough to do so.

There were so many times I came right to the end of the game and lost interest (I attribute this mainly to lack of support from friends and family)... but thanks to the persistant nagging of a couple of unnamed loved (I use this term loosely) ones in recent months - I finally found the motivation to sit down and tangle with this classic once again. The game is a bit odd in many ways - the least of which is not its quirky control schema. After a few days of mucking around I got a pretty good feel for things again and managed to make a really nice run almost beating the entire game in a single two hour sitting.

But all seemed lost as I realized that I had erased my save game file. Opps. I loaded a saved game from when I was just getting a feel for things and instead of reloading the correct one I resaved over it instead. That was not a happy moment as so much pressure seemed to be riding on my shoulders. It suddenly occured to me that I may not be able to beat this piece of shit and finally kick it to the curb after 18 years of embrassment, pain and suffering. A few days later after I managed to deal with the bulk of the followup emotional tramua - I decided to give it one more try. And then something amazing happened...

Suddenly I found myself ripping through the game like there was no tommorrow. I just leapt from tree branch to tree branch without any regard for my safety or the safety of my character. I found a way to overcome violent situations through nonviolent means. I found a way to bear staring at those beloved oversized pixels for just long enough to make the impossible a reality. Somewhere along the way I found a way to hope... hope that maybe perhaps the world COULD be a better place if we all gave it our best. Within the hour I found myself ready to acheive greatness again, only this time I kept three copies of my saved game in reserve just in case tragedy struck me again (damn you Murphy - damn you).

And then.... I beat it. As expected the ending sucked big fat donkey balls and can't be described as anything more than "unsatisfying". If the company that created this game hadn't gone out of business long ago - I would've considered contacting them and telling them so. The letter no doubt would've been filled with many obscenities and nasty euphimisms written only to spite my long time gaming slavemasters (whose "leadership" I've come to enjoy). Anyway here's a screenie for those of you pathetic enough to still be reading: 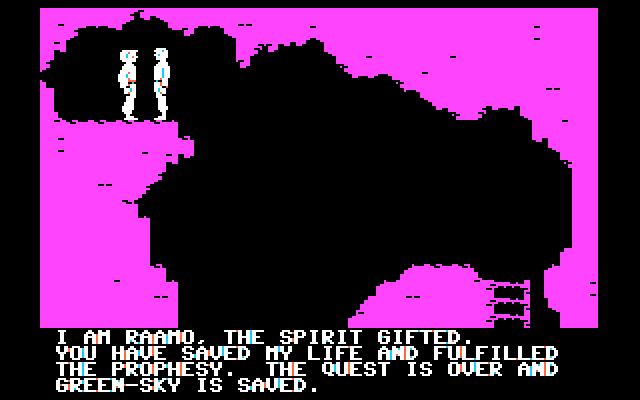